Find your Match in Lesbian Books

Join Us on Patreon

Combine Categories with Tags to find your book match or use the search bar to look for specific titles, authors or keywords

Find your Match in Lesbian Books

Honey in the Marrow by Emily Waters

An inspiring journey from grief and depression to forever love

As I’ve explained before, I’ve never been a big fanfiction reader but it so happens that the fanfic this book is based on is one of a handful I reviewed. I was both excited and a tad wary when I saw Ylva had picked it up. Excited for the author whose story will get more exposure, wary that the editing process would soften it, tone it down. I’m happy to report that the work that was done on this text tightens it but in no way takes away anything that made it so powerful in its original form.

At the beginning of Honey in the Marrow, Stella Carter is about to welcome her new roommate, her twenty-three years old niece Addie, into the house she moved into a few months ago, after her husband was murdered in the building where he worked as deputy chief of the LAPD. Soon, the younger woman’s presence breathes life and chaos into Stella’s limbo-like existence. Consumed by grief, Stella ignores most of it, until Addie brings Captain Elizabeth Murphy, a woman Stella has always felt antagonized by, back into her life. 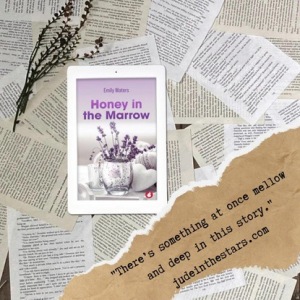 You don’t need to have watched the shows this story is derived from to enjoy it. The characters stand on their own feet and all that could distract from the main storylines has been cleverly trimmed. It’s still as beautiful, however, as moving, as hot as well, and that almost-first kiss I loved when I first read it is still there, as well as everything that made me want to review at the time.

Honey in the Marrow isn’t an easy story to read and yet I read it just as quickly the second time around. What makes it hard isn’t so much the sadness as the nothingness Stella feels, grieving her husband but also her job as an assistant district attorney and, I think above all, what could have been. In Elizabeth and with help from Addie, she gets another chance at the latter. As I wrote in my review of the fanfic, “what’s better than people who get a second – or third, or fourth – chance at life and make the most of it? When you think things are over and you’ve missed your chance at happiness but realise you didn’t?”.

There’s something at once mellow and deep in this story. It’s about grief and depression, about finding your person – and yourself – later in life, about having the strength and courage to allow the unknown in. About embracing the ambivalence of one’s feelings. About letting go of the past and giving the future a chance, whether you’re twenty-three or fifty-one or in your sixties.

Emily Waters writes all this with gentleness and sensitivity, never passing judgement on characters she obviously loves and respects, turning melancholy into hopefulness and a world of possibilities. 5 stars.

Check Our Merchandise
Share the Love
LesFood
Previous
Next

Created and Designed by techGstore.com

Join Us on Patreon

do you love free books?

Join Our Newsletter & Get a Guide to Find Them

no thanks, next time.